Renu Desai has donated her hair in service to a particular segment. Taking to her social media pages, the ‘Badri’ and ‘Jonny’ actress revealed that she donated her hair towards the making of wigs for cancer patients, for the second time.

“I cut/donated my hair the second time to help make wigs for cancer patients who can’t afford them (sic),” Renu wrote on Instagram, posting a pic of her. 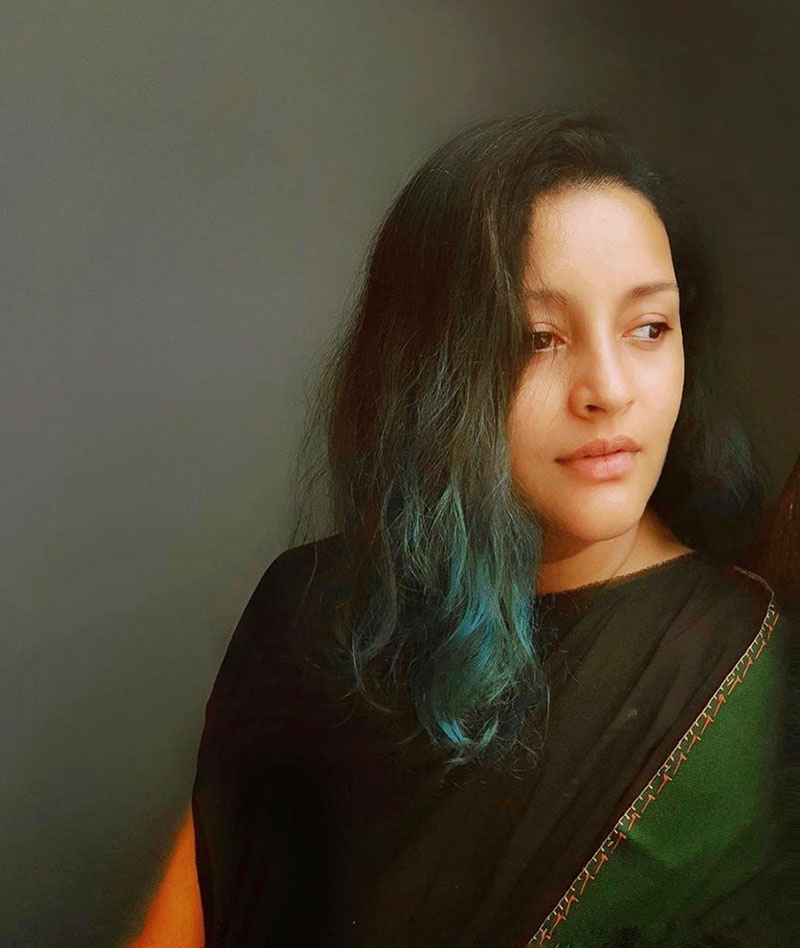 Getting poetic in a subsequent post, the former actress wrote, “His presence, wrapped in warm threads of pashmina, tip-toed into her silences (sic).” In a recent post, Renu shared a throwback pic of her early days as a model. She was all of 16 when she bid goodbye to her dream of becoming a space scientist and became a model and eventually an actress.

On the work front, the ex-wife of Pawan Kalyan recently participated in the shoot of a promo for a TV program. Renu has been waiting to launch her directorial project.

Sometimes, it seems like dogs just don’t understand the concept of hiding. Its like they think no one would see them if they close their eyes. And this thing makes us wonder “what are dogs up to?”. It’s like they think some magical power will make them invisible if they simply shut their eyes. But unfortunately, they get busted. Oh, no.

Some of the dogs are trying hard to hide behind curtains and some are so effortlessly hiding behind toilet paper. But whatever, at least they are trying their hardest to hide behind anything. So we should not be too hard on them.

If you want to see how creatively dogs are hiding, you can just scroll down. But remember that you can’t find ‘em all……can you?

This doggy seems to have forgotten that he’s no longer that little puppy who used to hide away so easily.

You’re always safe behind the curtain…

I am the absolute master of hide and seek!

Pretending to be a sweater – a classic disguise!

Everything’s under control. I can get out whenever I want…

If the cat can fit, I can as well!

Well, I’m in for a long wait while they search for me – might as well wait where there’s a food supply!

I told you I could fit!

It’s always a good idea to finish that sausage which you stole in your secret hiding place.

If they find you, just pretend you weren’t actually hiding.

You think they saw us?

A high-risk strategy: merge with the scenery.

Use household objects as best you can.

This is his favourite place!

Pranati has got scratches on her back. She is trying to apply ointment when Reyansh enters. He realises how she would have gotten hurt. She drapes her dupatta over her shoulder. She tries to walk away but he requests her to stop. Trust me now. She turns around and notices him standing there with his eyes closed. She keeps the ointment in his hand. Ishq hai plays. She removes her dupatta emotionally. She closes her eyes at his touch. He applies ointment on her back. She drapes the dupatta around her back when he is done and takes the ointment from him. You can open your eyes now. He looks at her. She thanks him and he thanks her for trusting him. She says I asked you a question sometime ago. You dint answer. He says I thought it was a statement. She tells him to still answer it. Is your surname so important to you that you are willing to overlook whatever happened with me? Is it important to you than my life? He replies that that’s why he is standing here. I am sorry. They share an eye lock.

Dadi is speaking to someone on phone. We are getting insulted because of that woman! How can my grandson do something like that? Get him out of jail. The guy tells her to wait for some time. He disconnects the call which irks Dadi. I will teach him a lesson once Vardhan is out! She calls another guy asks him to repay her favour now. The guy politely refuses and ends the call. She makes a few more call outs but gets the same response. She is about to throw it when Mallika tells her to dial the right number. She hugs Dadi. I feel very bad for you. Pranati has destroyed your family completely. What else will happen when you bring a girl like her home? She has no idea what a family means. Dadi receives a text. Mallika shows her the video of Vardhan’s arrest once again. Media is speculating about the share price and how Dadi will face the public again.

Pranati is stunned as Reyansh apologizes to her again. He smiles. I know I have never apologized to anyone. I have made many mistakes since I was a kid but I never learnt to say sorry. No one was there to pull my ears earlier. You know this family well. Business partners live here. there is no family. People only consider profit and loss. No one has taught the kids anything till date. We simply learnt what we saw and imbibed it. It was wrong though. We never understood the difference between right and wrong but I have understood it now. I am sorry. She looks at him sweetly. Reyansh asks her why she is looking at him like that. She replies that she saw the real Reyansh today. I know that you too would have seen a lot in life. You too would have been through bad phases. You are wearing a mask to face the world but there is no mask today. It is just Reyansh, real Reyansh. They share an eye lock.

Mallika says people are mocking Khurana family. Notifications wont stop. I am few up Dadi. She takes the glass from Dadi’s hands. Vardhan dint do the right thing but media and police shouldn’t have been involved. I really feel bad for you. You are not at fault here. you are getting insulted for no reason. I would have asked Papa to tackle the case only if I was the DIL of this house, if I was Reyansh’s wife. I couldn’t be that girl though. I feel really bad for you. I will ask Papa to settle this matter once and for all. Dadi says I know you cannot see Reyansh in this condition. People are bad mouthing her. Mallika gives her alcohol. This is what you really need. God knows what all have you been through yesterday. Dadi thinks Reyansh’s eyes hinted at some hidden feelings for Pranati. Is it love? Mallika asks her where she is lost. Dadi says I was thinking about Reyansh.

Pranati says I am very happy today. You proved me right today finally. I would have never fallen for you if you had been the wrong guy. She wipes her tears. I was cursing myself for whatever happened between us. Reyansh is in tears as well. Pranati continues. I couldn’t figure out how I couldn’t recognize a person. My heart always told me that I was right though. I dint make any mistake in recognizing you. You are not bad at all. You just pretend to be that way. Your heart is very pure. In fact, you are a really, really nice guy. It is time to bring this good guy in front of the world. This is the real Reyansh who is good and honest. Cry your heart out. You have been hiding them since so long. Maybe the mask will come off with these tears. Jugnu calls out to them. Has something happened? They wipe their tears. Reyansh says nothing happened here. Jugnu says I felt as if I saw some bad dream. I heard some voice. Reyansh assures her it was her dream. Let’s sleep now. Jugnu nods. Riya Chachi will feel bad if I am up so late. She will scold me. He tells her no one will scold her. He takes her to her room. Pranati smiles.

Mallika assures Dadi that she will pacify her father the moment she comes to this house as Reyansh’s wife. Pranati will be out of the house then. It’s a win-win situation. Dadi looks at her.

Reyansh is tucking Jugnu in the bed. He keeps thinking of what Pranati had said to him. Jugnu holds his hand to shake him out of his reverie. He pats at her head. Sleep now. I came closer to Pranati and Jugnu while trying to distance them. Am I changing? Are you afraid to lose these two Reyansh? Do you fear losing what you have? He kisses on Jugnu’s cheek.

Dadi joins hands with Mallika. We can think of implementing this plan.

Precap: Mallika gets closer to Reyansh. Pranati gets sad seeing that. Mallika tells Dadi that she talked with her father. Did she talk to Reyansh? Dadi says it’s time for Mallika to become daughter-in-law of that house.

Riddhima Kapoor Sahni recently took to Instagram to share birthday wishes for her dear cousin, Kareena Kapoor Khan. Riddhima posted a collage of a childhood picture and a recent picture while sending out love for the gorgeous actor. Kareena also re-shared the picture on her story while thanking her cousin for her heartfelt wishes.

Riddhima Kapoor Sahni recently took to her Instagram story to a throwback picture of her cousin Kareena Kapoor Khan as she wished her a happy birthday. In the childhood picture posted, Karisma Kapoor, Kareena Kapoor Khan, and Riddhima Kapoor Sahni are seen posing for the camera while enjoying each other’s company on a red couch. The picture has been put together with a recent photograph clicked at a house party.

Kareena Kapoor Khan was quick to share the picture on her official Instagram handle while thanking her cousin for the wishes. She also called Riddhima her ’40 twin’ as they are both the same age. She also added a pair of red hearts to express herself better. Have a look at the story on Kareena Kapoor Khan’s Instagram here.

Kareena Kapoor Khan also posted a picture of herself addressing her 40th birthday and many experiences that have come with it. She expressed how thankful she was, for every little thing in her life. Through the monochrome picture, she also spoke about the strong and bold woman that she has become over the span of 40 years. Have a look at the post on Kareena Kapoor Khan’s Instagram here.

On the work front, Kareena Kapoor Khan is all set to star in the upcoming Aamir Khan film, Laal Singh Chadha. The film is the official adaptation of Forrest Gump and is being directed by Advait Chandan. Laal Singh Chadha also stars actors like Vijay Sethupathi and Mona Singh in pivotal roles and is expected to hit theatres in 2021.