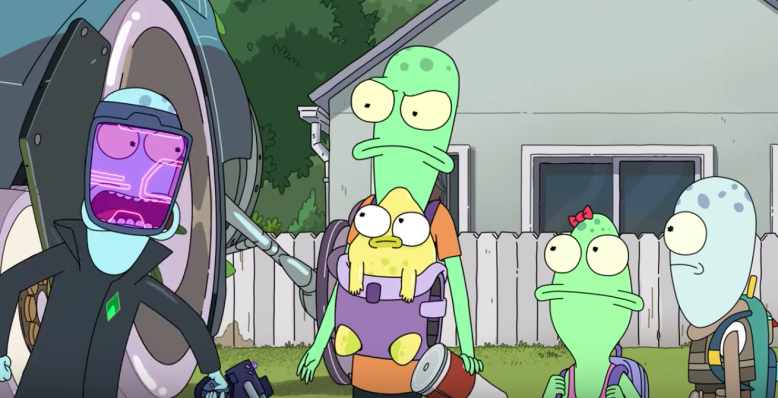 “Rick and Morty” fans have been known to get a bit feisty about their beloved Adult Swim series. We all remember the great McDonald’s Szechuan Sauce catastrophe, which prompted co-creator Dan Harmon to declare he “wouldn’t wish that show’s fans on any fast-food restaurant.” With such a fervent bunch, however, any new content with the slightest connection to the hit animated sci-fi show is bound to sell like hotcakes, and “Solar Opposites” has landed its spaceship on Hulu just in time. Hulu just released a delightfully wackadoo first trailer that is sure to have those “Rick and Morty” fans forgetting all about Szechuan Sauce.

The official synopsis from Hulu reads: “‘Solar Opposites’ centers around a team of four aliens who escape their exploding home world only to crash land into a move-in ready home in suburban America. They are evenly split on whether Earth is awful or awesome. Korvo (Roiland) and Yumyulack (Sean Giambroni) only see the pollution, crass consumerism, and human frailty while Terry (Thomas Middleditch) and Jesse (Mary Mack) love humans and all their TV, junk food and fun stuff. Their mission: protect the Pupa, a living super computer that will one day evolve into its true form, consume them and terraform the Earth.”

“Solar Opposites” consists of eight half-hour episodes. Hulu will premiere the first installment of “Solar Opposites” on Friday, May 8. Check out the thrillingly bizarre trailer below, and hold on to your hats.

Sign Up: Stay on top of the latest breaking film and TV news! Sign up for our Email Newsletters here.

Akbar Ahmad Dumpy goes into self isolation in Uttarakhand, whose party was attended by Kanika Kapoor

The ‘Jimmy Kimmel Live!’ host also shared that the delivery service was giving gift cards to all of the nurses that work on Kimball Fairbanks’ floor at her Utah-based hospital.

Jennifer Aniston and Jimmy Kimmel teamed up to help a nurse that tested positive for COVID-19 during Thursday’s episode of Jimmy Kimmel Live!

The segment opened with Kimmel talking to Kimball Fairbanks, a cardiovascular nurse from St. George, Utah, about her experience with the coronavirus.

Fairbanks explained that she tested positive for COVID-19 earlier in the week. In response to the diagnosis, she was furloughed from work and must self-isolate for two weeks.

She admitted that she wasn’t sure how she contracted the virus, but likely got it while at work.

“I kind of felt like I got hit by a train, but I think I just have really mild symptoms,” she said, noting that it felt like she had a head cold combined with the flu. Fairbanks added that her symptoms feel “decently manageable.”

Kimmel said that he wanted to cheer her up and brought Aniston into the video chat. “I just have to say God bless you and all of you that are out there, doing what you’re doing,” Aniston told Fairbanks. “I don’t even know how to express my gratitude to everything that you guys are doing and putting your health at risk and all of that. You’re just phenomenal.”

Fairbanks later told Aniston and Kimmel that she has not been able to cook while distancing herself from her family, so she has been relying on delivery services to provide her food.

“That’s good cause you know what Jimmy cooked up?” said Aniston. “You’re gonna be getting a $10,000 gift certificate from Postmates.”

Fairbanks was initially speechless and Kimmel joked, “But you have to use it all in one shot.” The host also shared that Postmates was giving gift cards to all of the nurses that work on her floor at the hospital.

“Oh behalf of all of us, I think Jen said it very well, we are very, very grateful to what you and all these health care workers are doing,” said Kimmel. “It’s so far above and beyond. It really is unbelievable.”

Aniston later told Kimmel how she herself is handling being quarantined.

After noting that she hasn’t left her house in three weeks, the actress revealed that she doesn’t mind being stuck at home. “I’m an agoraphobe,” she said. “It’s a nightmare, but me personally, it’s not been that much of a challenge.”

She said that the “most challenging thing is watching news,” though she limits catching up on current events to once in the morning and again in the evening.

Aniston is passing the time by cleaning and organizing. She revealed that she found “a couple treasures” while cleaning, including a Betamax of her first audition for the soap opera Search for Tomorrow when she was 13 years old. Her father, John Aniston, starred on the show.

“I’m dying to see it, but I was 13 years old and I thought I lost it forever, but I was sort of just cleaning out tons of old boxes,” she said. Aniston then shared her plans to get the Betamax transferred so that she can watch it.

The part ultimately went to Jane Krakowski. “The character’s name was TR and she was a 13-year-old runaway and I had been visiting my dad at the set — it was shot in New York back then,” she explained. “On the bulletin board it was an audition for TR, a 13-year-old runaway, and I was like, ‘That’s me.'”

Despite Aniston’s confidence that she was meant to play the part, her father did not want her to be on the show. “I actually went around his back and I called his agent,” she recalled. “I know how to make things happen.”

“Then I auditioned. I thought I did great. I was sure that I was gonna get it. And I was also like, ‘My dad’s on the show,'” said the actress.

Aniston said that another treasure she found while cleaning was a film reel of her parents on The Newlywed Game. “That is a jewel for me,” she said, noting that they won. She added that their victory “doesn’t make marriage last.”

Kim and Kourtney Kardashian come to blows in full “reality”

The followers of the family Kardashian already aware of the friction between the sisters Kim and Kourtney. This time, however, a discussion came too far. In an episode of his reality, Keeping Up With the Kardashiansboth were involved in a discussions that were climbing up to come to blows.

The relationship between the Kardashians started to deteriorate some months ago, when Kourtney decided to leave the reality that takes 18 seasons, but as the wife of Kanye West did not like anything. For that reason, Kourtney, who now says that he wants to dedicate himself to his family life, and Kim, who wants to continue with the program, staged one of the most critical periods since the beginning of the program.

In the uncomfortable scene in the united States was last night in your program, the sisters, in the presence of Kendall and Khloé, they start pushing and end to the strikes.

“Do you think that I want to be in this negative environment all the days of my life?”, he told Kourtney all her sisters. “It’s torture”.

After the discussion, Khloé was very surprised with what happened. “Kim and I are really anodadas for how things escalated so fast. We don’t know where it comes from all of this. We know that there has been friction recently, but I don’t think any of us know that it was so strong. It is truly amazing that you have gone so far,” he said.

After you get to know the images of the fight, Kourtney Kardashian released a press statement where he sought to make it clear that they will no longer be part of the reality. “It is hard for me to see these first two episodes, but it is in these darkest moments where it reaches the overcoming. I finally had the courage to change what no longer was bringing me happiness and put my time and energy on what is. So choose happiness!”, he wrote in his account of Instagram.

For his part, Kim was invited to the program virtual of Jimmy Fallon, and explained that the level of violence surprised everyone, especially his mother Kris Jenner. He explained that what sparked the anger was the lack of clarity of his sister, who had not expressed his decision to leave and was on the set of reluctantly.

The show will offer lively and humorous chats between Horowitz — who is holed up in his New York apartment — and various entertainers who join him via a remote video connection. Will Arnett kicks off the series as the first guest.

Amid his own quarantine, Horowitz has been vocal on social media about his experience at home, sometimes giving comedic anecdotes. “Quarantine Josh eats grilled cheese. Otherwise I’m pretty much the same,” he tweeted Friday. On other occasions, he has asked his followers to list their favorite comfort movie and to pick the best of two rom-com film options, such as Nora Ephron’s Sleepless in Seattle and You’ve Got Mail.